My Music, My Choice
Lucas Fulks

I believe that my music is my choice music should be unregulated by anyone and if you like it you should be able to listen to it. If music touches a person the way that ICP has done for me then everyone should be able to listen to the music they want to without being judged. One way ICP has really helped me is it’s always there for me when I need to focus and helps me not want to hurt people because ICP is a horrorcore band so I listen to ICP so I don’t harm people.

Music has been my aid in controlling anger and it is the way I calm down. It can help me relax and reach a place of zen. For other people music could help them study, focus, get through hard times, depression, and to celebrate. Music can be anything you want it to be.

Music is in a way kind of the soul of people. There are so many different types of music and everyone likes different kinds. It might not seem like it, but music affects our everyday lives. This is why I believe that my music is my choice.
https://soundcloud.com/user-602128617/rec002wav-1
BY SKATERS, FOR SKATERS
By Eli Parker and Lucas Fulks

Late in the summer of 2016, rails, ramps, and concrete boxes began to appear at a formerly demolished lumberyard located at 550 E. 9th Ave. next to CJ’s Diner. Skateboarders Jeff Hamner, Ty Russell, and Lucas Hess of Concrete Sk8 Shop, and friends started pouring concrete and making corner bowls and ramps to serve the more advanced skaters in Durango.


Since the rails and ramps began appearing, more and more people have been coming in, volunteering their time to build new features, and enjoying the skatepark and its community. The park that people call the DIY has become a labor of love for local skaters and they’re keeping it close to their hearts. They put their own time, effort and resources into building it and making it better for every skater who goes there. According to sources, the owner of the supposedly abandoned “concrete jungle”, who could not be contacted for the purposes of this story, cannot get building permits, and so they have allowed let Hamner, Russell, and Hess to build there.


“They call it the Die D-I-Y Park,” Cairo Pagan, a local skater said. “They’ve got a bunch of concrete stuff that’s built up. A quarter pipe, a little nipple, some spines and little ramps.”

This makeshift, handmade skatepark now serves as a useful addition to Durango’s original skatepark located next to Schneider Park at 950 Roosa Ave. that was built in 1996, and has long been a staple of the Durango skater community. As there is nowhere to skateboard near Fort Lewis College, the DIY was probably built so that skaters had somewhere to skate without fear of getting kicked out or fined.


Skateboards, rollerblades, and other self-propelled vehicles are prohibited on Fort Lewis’ campus, and violators can be fined for destruction of property. Additionally, many areas around town, such as car garages and the Durango Transit Center, have anti-skateboarding bumps drilled into curbs and ledges to prevent skateboarders from grinding and performing maneuvers, and to prevent damage to the curb and sidewalk. The downtown area of Durango seems to be specifically against skateboarding, as there are posted “No Skateboarding” signs posted up and down Main Street, but the town allows and even endorses bicycling.


The skatepark at Schneider Park features a variety of bowls, ramps, ledges, and rails and was professionally planned, developed, and built. The DIY Skatepark, having been built by volunteers and non-professionals, probably better serves more advanced skaters and riders with its unique and ramshackle build style, and ought to be used with some caution. “The guys that are super good skate that park- the guys that know how to ride that stuff. It’s a little sketchier, less smooth terrain,” Pagan said. Their makeshift ramps are not the safest because people made them out of whatever they have lying around, not to mention that the site may have remnants of its former life as a lumber yard. A lot of the people at the normal skatepark wear helmets, while people at the skatepark by CJ’s rarely wear helmets. Some skaters said it's safe and no one has yet had any serious injuries.


Finished, professional skateparks can cost up to $250,000 dollars, at the least. It's unlikely that the city will provide a second skatepark in Durango because there are other amenities to consider with the city’s budget decreasing in 2017, and because the current skate park provides recreation to most of the city’s skaters. As such, the skateboarders who built the DIY Skatepark are providing a useful alternative to the Schneider Skatepark.

We asked questions about areas in our community and reported on them. Lucas and I asked questions of people at the skate park in order to gather information. Since there is no information online about the owner of the property, we had to do more searching than we thought we would have to. We built background knowledge I have friends that skateboard and we already knew things about skateboarding, so we used that knowledge to build on. We had to do some searching about DIY skateparks and I was astounded by the time and effort that people are willing to spend on something that they love. The construction of the DIY park itself was pretty shocking, too. Making concrete smooth and rid able is really difficult and takes a lot of time. Not to mention building ramps and rails and the planning that goes into making a functioning skate park. We prepared by researching DIY parks and the materials that are most often used to make them. While researching, we learned about the cost of constructing a proper skate park, as well as stumbling upon a newspaper article in Detroit that reported on a few teenagers busted for making a park in a supposedly abandoned parking lot.

I learned that bias is bad for people who want to know facts. The news should be more about fact and less about opinion. I learned that it’s difficult to be unbiased, but I don’t really know how you avoid it. Normally when I’m telling people things, I don’t mix my opinion in there, and I also don’t lie to people about things that happen.
At first, I thought journalism was as simple as reporting data and putting it on a piece of paper, but there’s an actual format for it. You have to keep it fresh and entertaining. That’s why some news channels use bias to keep things interesting. I grew as a journalist because I had to grow more comfortable interacting with people I don’t know. I don’t skate and so talking to skaters was a little weird and sort of uncomfortable. I thought I would say something wrong and make it awkward. Sometimes you pretend to know everything about things and then say something wrong, and that’s hard. I was challenged by that. If I were to write another piece of journalism, I think I might dig a little deeper. Maybe I’d go to the other skate park and talk to people there. I’m proud of all of the research that Luke and I did. Curiosity was about to kill the cat for me about the DIY skate park and I had a hundred questions about it. Now I know the answers and I’m proud of that. 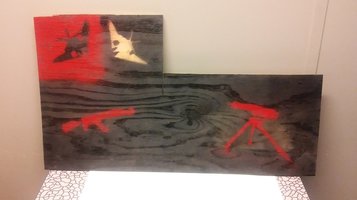 My artwork is a large piece of plywood that depicts how weapons revolutionized war. I chose the AK-47, the maxing gun, and the F-117 Nighthawk as three pieces of military machinery that changed how nations conduct war.

Technology and weaponry have evolved over time, We aren’t using black powder rifles anymore. We’re more advanced, more efficient, and more deadly. We’re not sending a bunch of guys to fight on a field anymore. I think that these evolutions have created a sense of ambiguity about who your enemy really is. There’s a greater likelihood that civilians are involved, and that soldiers will suffer from psychological disorders when they get back home. Now, instead of men on a field directly addressing one another, there’s a distance and a separation that basically means that nothing is safe.

I found images of the weapons online, and then I asked Miss Britt and looked at YouTube for help learning how to make a stencil. Once I figured out about positive and negative space, I made prototypes for my stencils, which I really enjoyed. It was fun to cut cardboard with an exacto knife and learn how to create a good stencil.

I don’t really think about terrorist attacks. I live in a small rural town that’s pretty removed from everything. If I lived in D.C. or near a base or something, I think that I might be more worried- and I’d never really thought about that before. I didn’t realize that proximity has an effect on our mindset about war, terrorism, and whether it can or cannot affect us.

​I also learned about positive and negative space and how we use those things to create a stencil that will make a quality reproduction of an image. 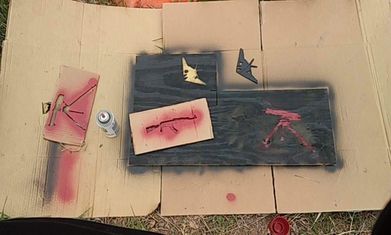 during the painting process
Powered by